As several years’ worth of rain has fallen in the past week, we decided against knocking a hole in the front of the house today.

(Of course, it’s been sunny all day so we could have done the wall panel in the end.)

Instead, we fired up the wallpaper steam stripper, opened the windows in the Stone Room, and got stripping.

The Stone Room is the Victorian addition to the house. It’s a square, solid stone, two-storey structure stuck onto the left-hand side of the original house. It’s offset slightly too – it protrudes about four feet to the front of the house, presumably because of the shape of the banks behind the house. But who knows.

There used to be a window in the front until the 1950s (we think), then the previous owner filled it in. We haven’t decided whether or not to reinstate it yet, but we’ll definitely be rebuilding the in-fill because it looks a mess from the outside and we’d rather it blends in.

The Stone Room was our bedroom until a month or so ago, when we moved up into The Beautiful Attic. It’s going to become our huge, decadent bathroom. 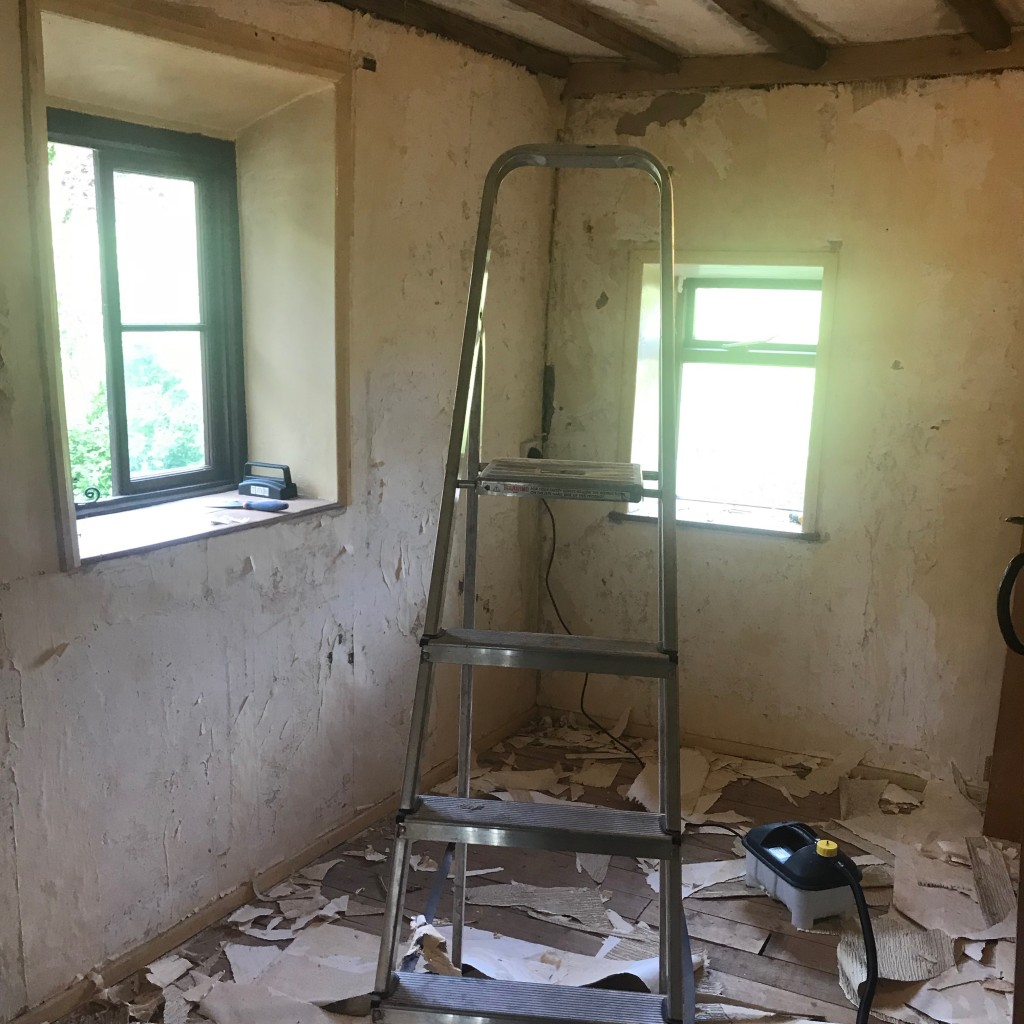 We’re going to make the window on the left bigger

We have plans to make the back window much bigger and take it down to the floor so Vicky can lie in the bath and look up the garden.

Also, the roof leaks and the roof space is dark and full of terrors. 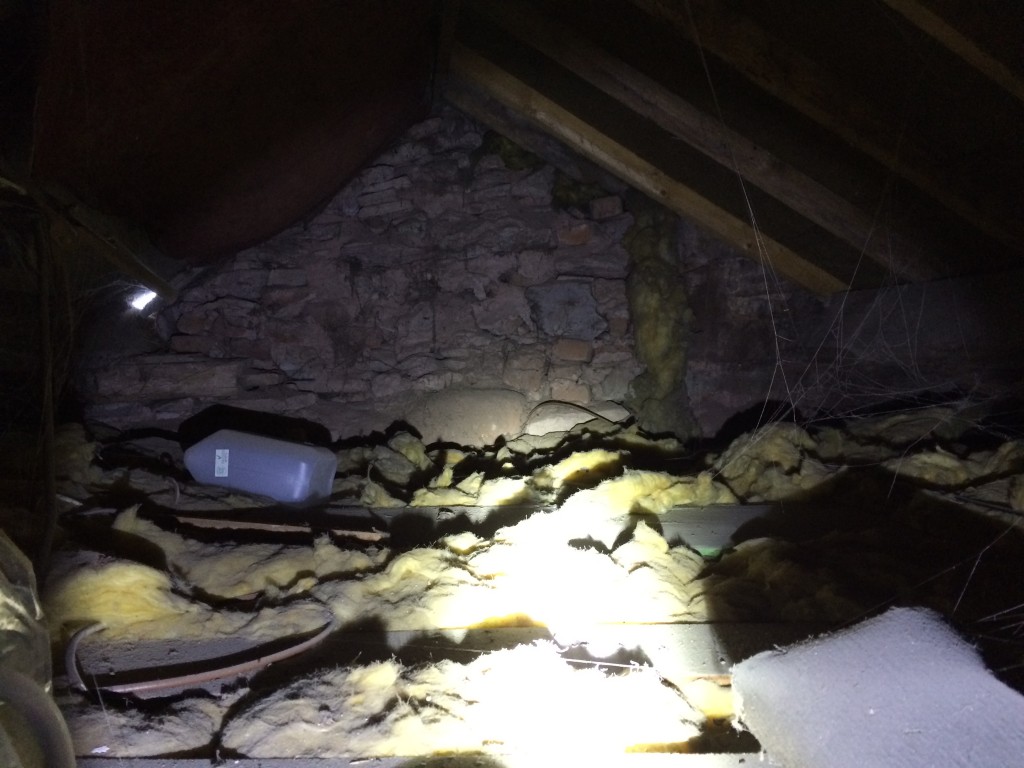 The Stone Room roof space is dark and full of terrors

We also wanted to investigate the impression on the far wall – you can see where there was once a fireplace. We’re not holding out much hope, but you never know… We’ll probably put one back when we start making the room beautiful.

Before beauty, though, comes The Great Horror.

We stripped all the structural anaglypta wallpaper off… 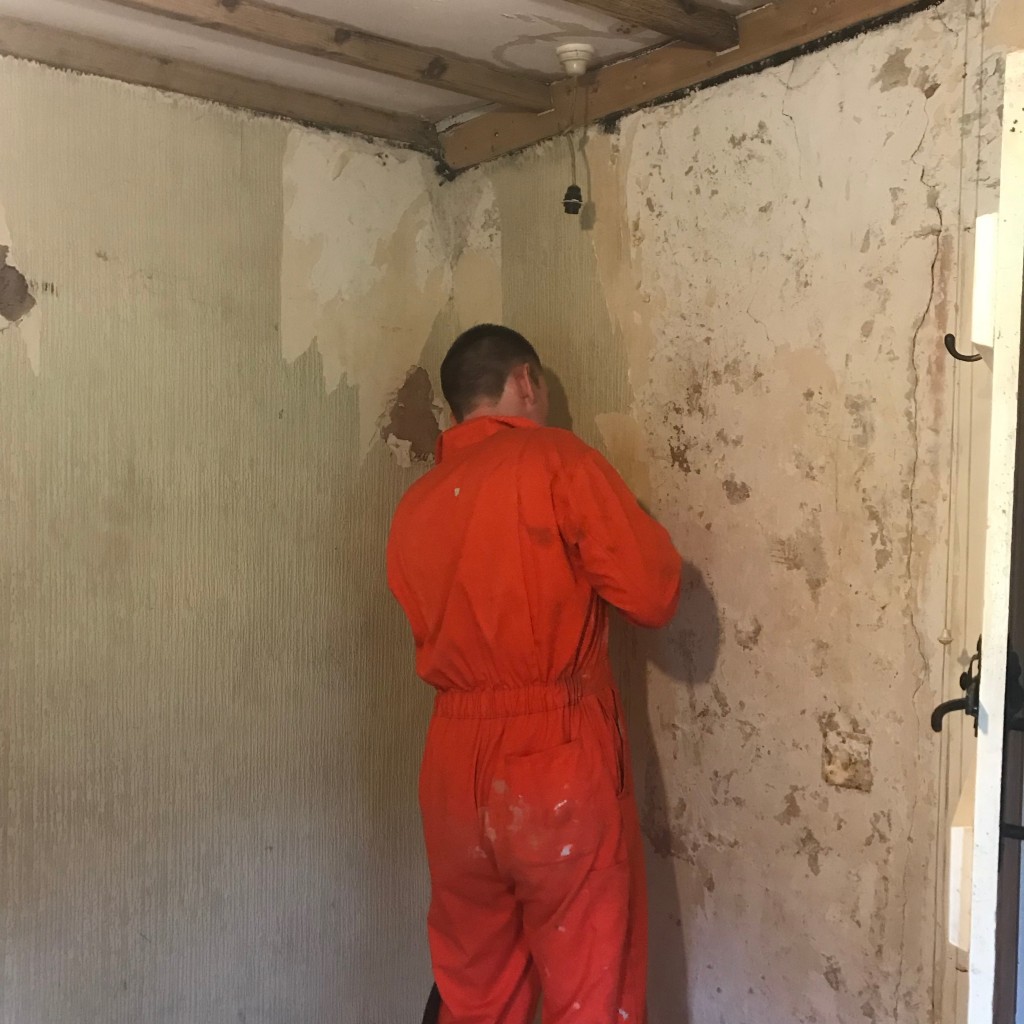 And we found some cool remnants of old pretty wallpaper: 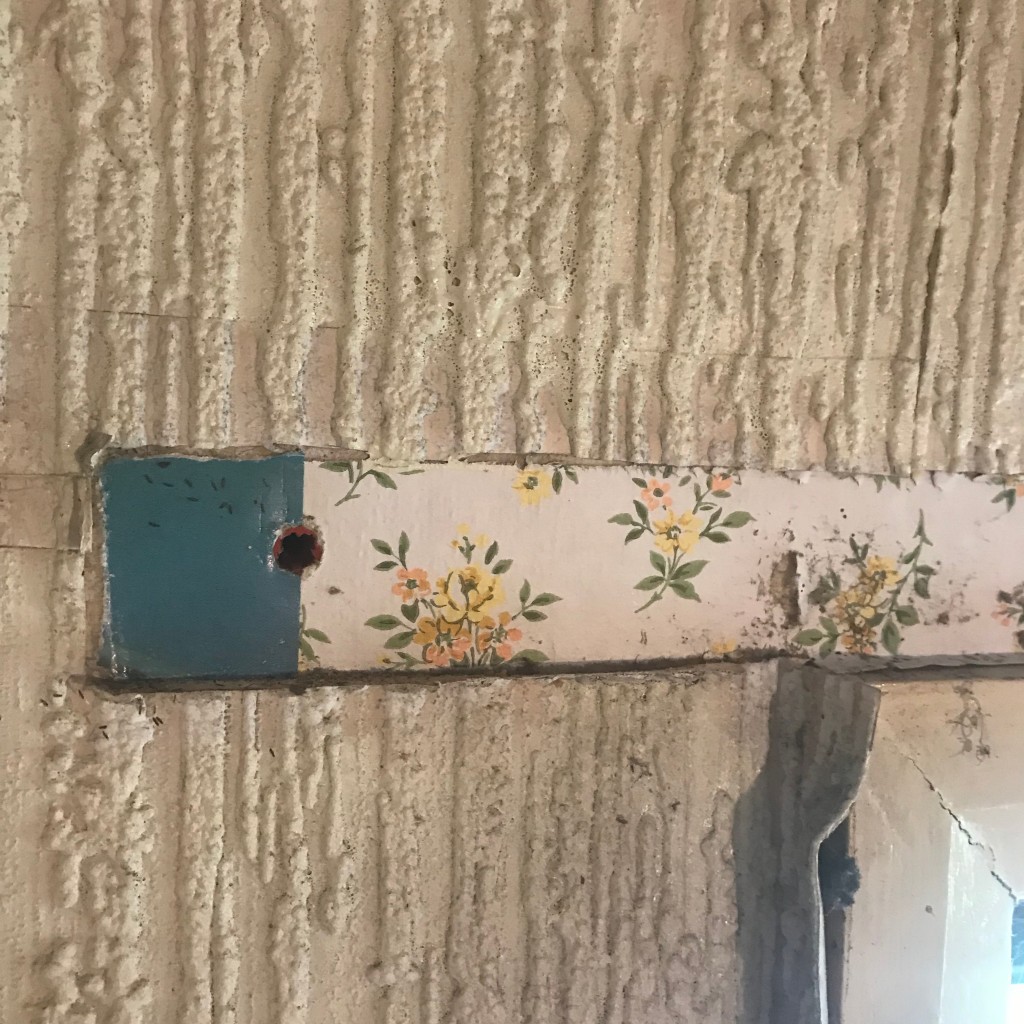 And knocked some bloody great holes in the wall. Which was exciting.

Turns out there’s just random bricks shoved into the old fireplace, and we can still see the firebox and firebrick. Nothing pretty though.

A lot of plaster came off with the wallpaper, so we thought, “Sod it, let’s see what the stone walls are like.”

Turns out, the interior stone wall is in pretty good shape. It’ll need repointing and whatnot, but we may make it a feature stone wall and limewash it. 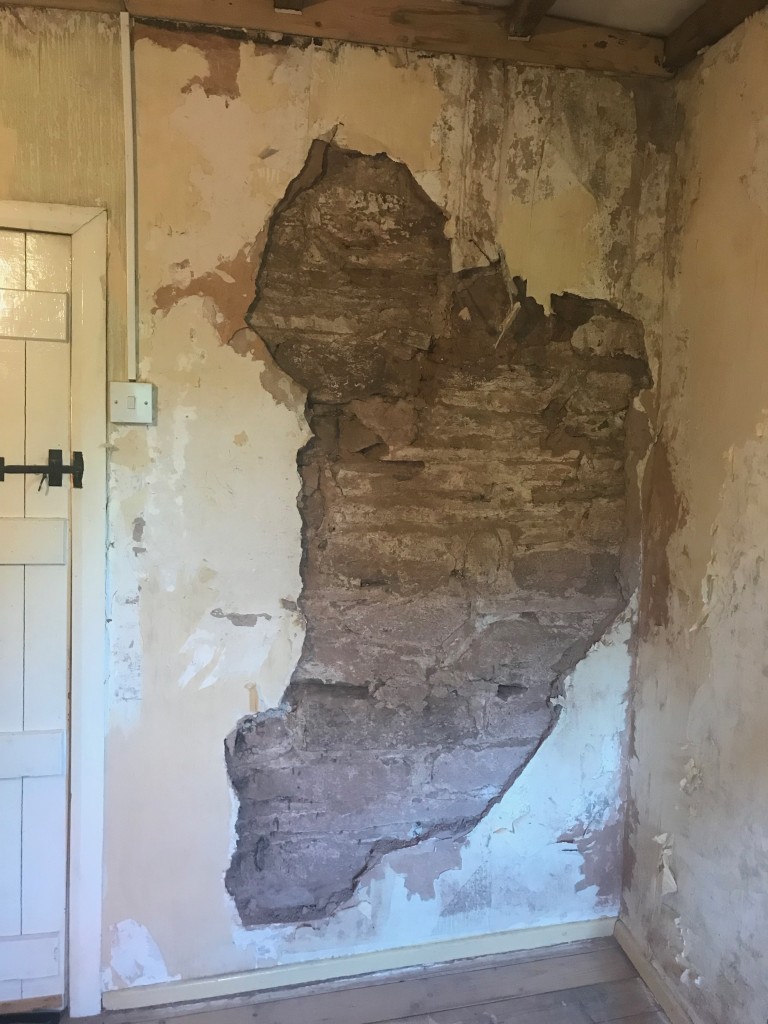 The rest of the walls, we’ll repoint then insulate with cork boards (probably) and lime plaster. We may put some wood panelling up. No idea yet. Watch this space!

Creatures On The Ceiling

One thing we will miss about sleeping in that room is our Ceiling Creature Companions. When we had the timbers sandblasted, it created some interesting shapes on the plasterboard. Like this velociraptor: 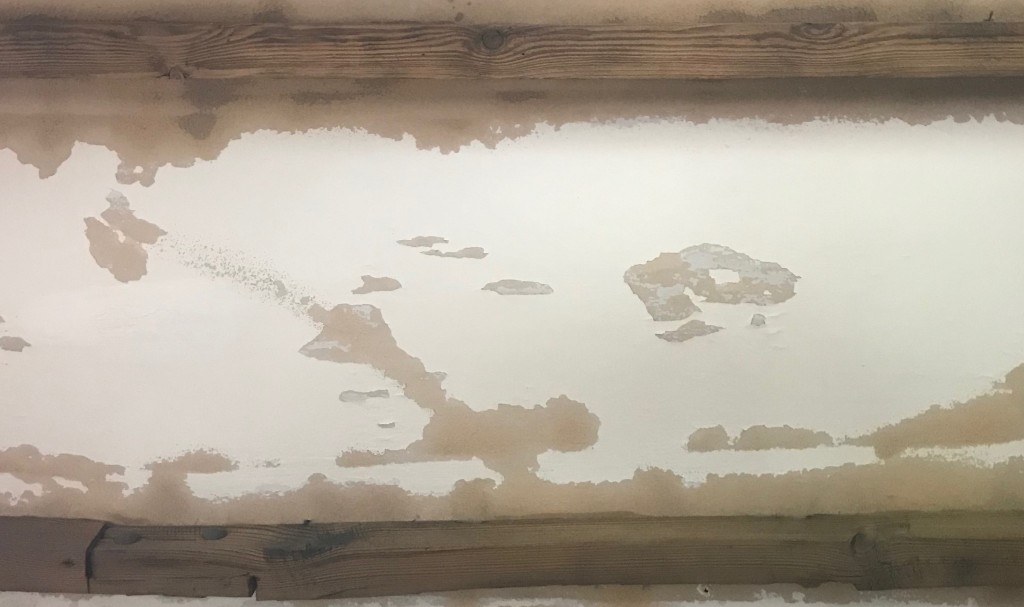 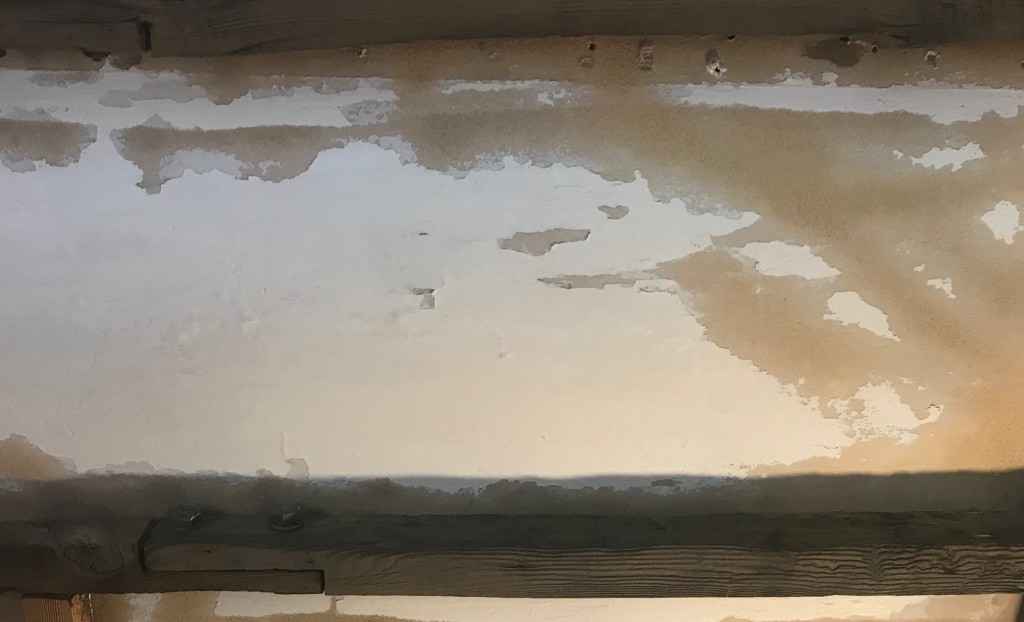 Anyway – having made a mahoosive mess, we’re done for the day. Tomorrow will be more of the same if the weather is wet, or we’ll knock a great big hole in the front of the house again.