When the TinySheeps came to live with us, we kind of knew they’d need a haircut at some point, but it was an abstract concept. We ignored it for quite a long time because, well, sheep shearing was something that happened to other people, in another world.

Then spring arrived, and we thought about it again, briefly. Watched a couple of YouTube videos. Went back to not thinking about it.

Cue summer, and the local sheep start looking rather less woolly… and we have a fistful of choices.

1. Ask the local farmers if we can bring our TinySheeps over when they have their mass shearing.
2. Find a shearer who does small flocks and pet sheep, and fling them around £50 to do our boys.
3. Buy a pair of shears and have a go ourselves.

One of my Life Values is to try as many new things as possible. Learn as many new skills as possible. And extract maximum satisfaction and value from life by doing real, practical things we can look at afterwards and think, “I did that. I did it with my whole heart and I did my best and it was fun.”

Also we like to amuse ourselves and our loved ones, so we decided to have a go ourselves.

Yesterday, we watched some YouTube videos of farmers and shearers shearing their sheeps and making it look easy.

I thought we’d be shearing today – Sunday – so it came as something of a surprise when I went outside yesterday evening to ask Joe if he was ready to go out to our friends’ son’s birthday party in their field, and was confronted with this: 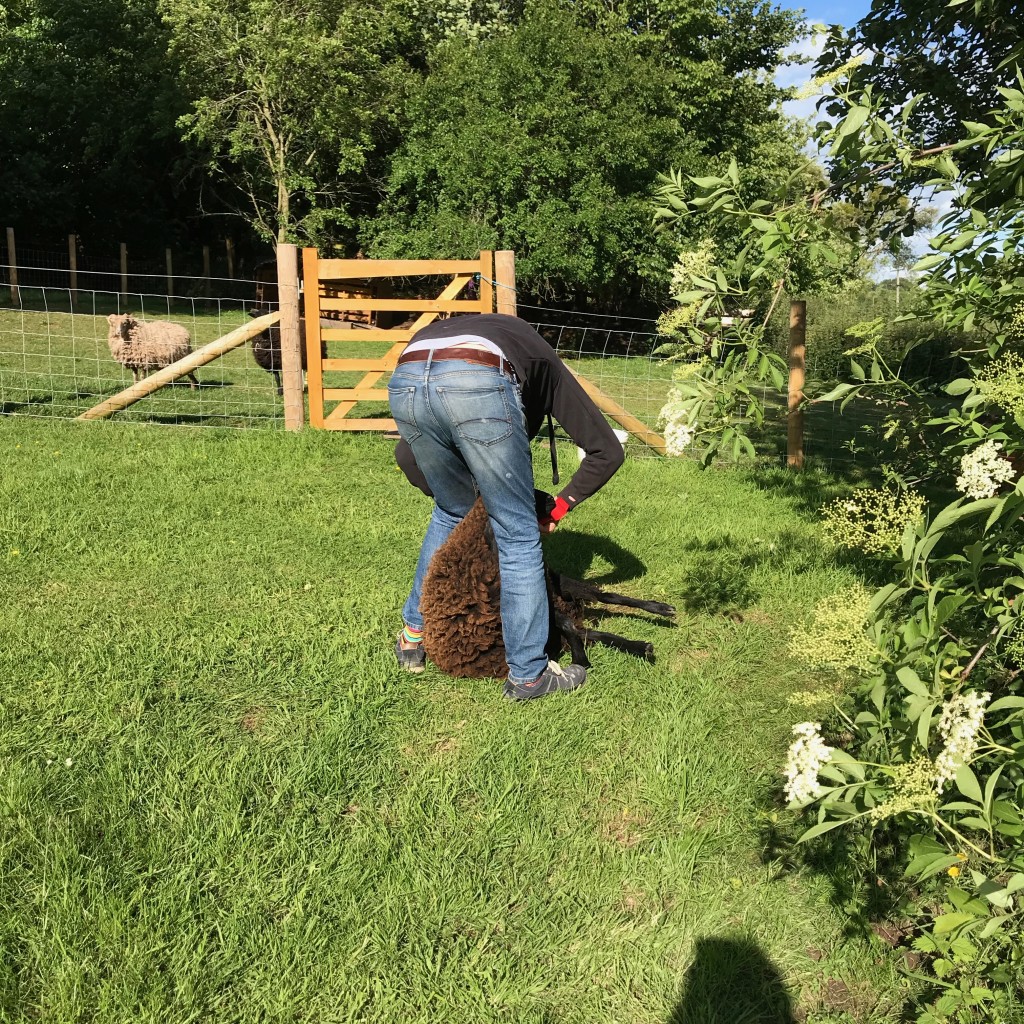 Joe had wandered outside with our new shears, wrestled Bronson into a sitting position, and got clipping. Note Bronson’s alarmed face: they’re only a year old, so this is their first experience of the baa-bers. (Geddit? I’m funny. Shut up.)

Joe managed to shear about half of Bronson’s woolly coat, then Bronson got wriggly. So I took over the shearing while Joe immobilised our little woolly buddy.

Shearing the back, shoulders, and back of neck is fine. It goes smoothly and is relatively non-scary because there’s plenty of fleece and the skin is taut. It’s easy to bend the sheep in such a way you don’t risk cutting them.

But when you get to their undercarriage, it gets a bit nervy – their soft bellies are vulnerable, and you can’t really see their neck skin very well. Their willies hide in their belly wool and are not necessarily where you’d expect them to be if you’re not familiar with sheep anatomy. And their crotch and leg skin pulls easily and is delicate.

Which means we’ve not given them as close as shave as we could have done, but we didn’t want to risk any cuts or injuries.

It’s funny – when you tip a sheep on its butt, they go strangely docile. You can manoeuvre them around as long as you keep them on their butts and keep their shoulders firmly in place. They don’t like it… but they don’t panic and they don’t get angry. Or that’s what we thought. More on that later.

It took us about 45 minutes and two sessions to shear Bronson (he escaped at one point).

We’re not going to win any prizes for speed or neatness, but for a first attempt, we’re pretty damn chuffed with ourselves.

We’ve given Bronson the bouclé look. He’s smart and fashionable.

And he looks TEENY. 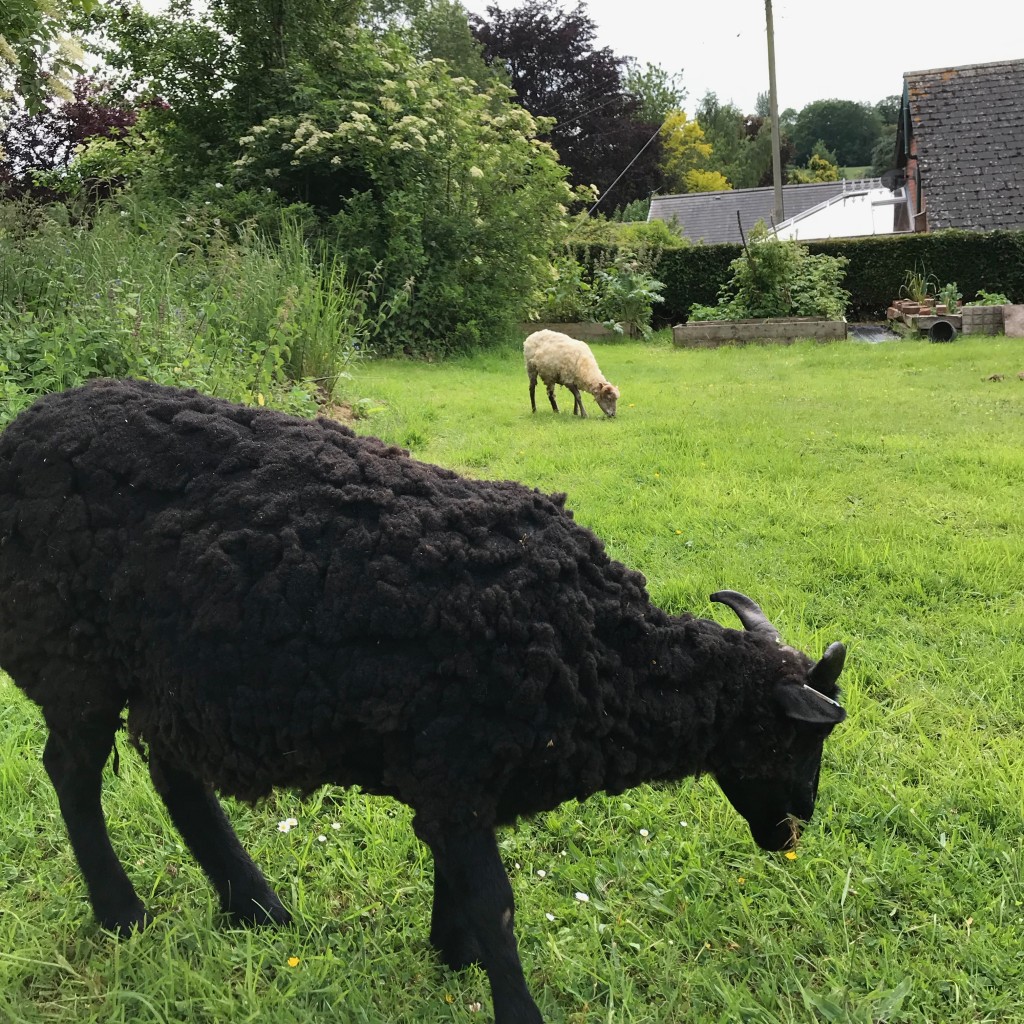 Though he be but tiny, he be fierce

First up this morning was Picard. He’s feisty, is Picard, so we thought we’d tackle him first.

Turns out, not all sheeps go totally docile when you tip them onto their butts. Some of them wriggle and bellow at you. 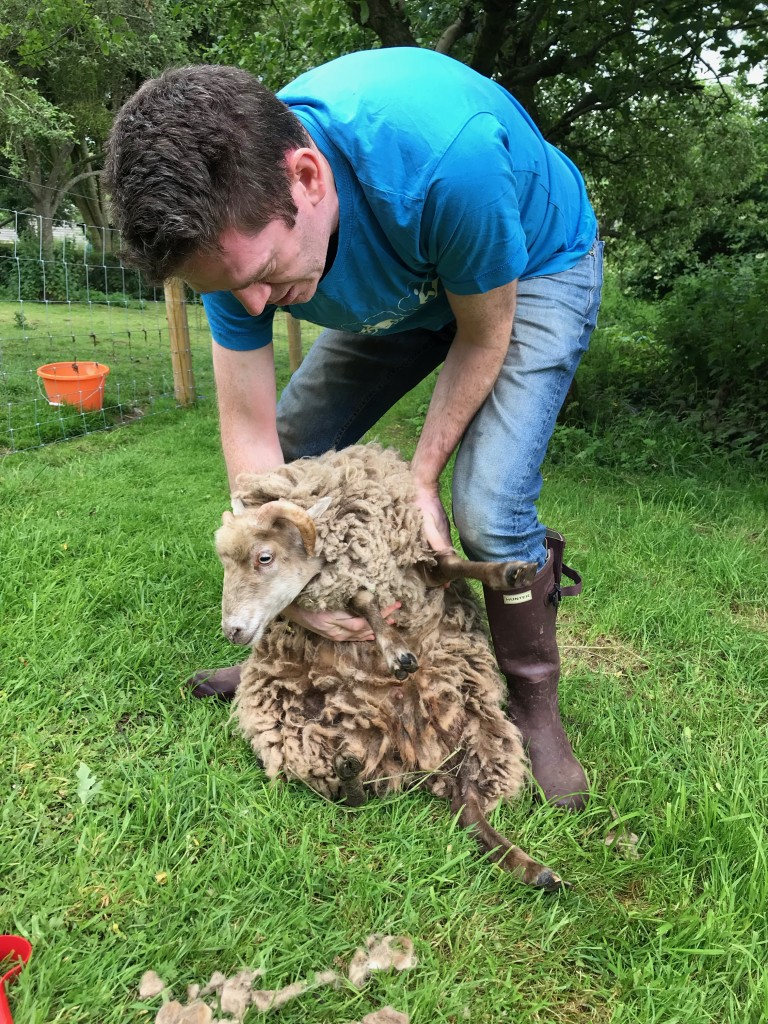 This is Picard’s WTF ARE YOU DOING face

Picard still has a dangly bit of wool hanging from his undercarriage, but he, too, is now freshly clipped. He sustained a couple of tiny grazes, which I feel awful about (but he doesn’t seem to care).

He was so mad at us, he wouldn’t even eat his strawberries for about an hour. To put his rage into perspective, Picard’s favourite thing ever is strawberries. He’d eat an entire basket of them all at once if you let him.

But he looks super-smart now.

Finally, we sat Kernic on his butt and sheared him, too. Kernic is the cuddliest little sheep you ever did meet: if you sit quietly while they’re all out munching, after a while, you’ll get a warm snuffling in your ear and Kernic will lean on you and ask for a cuddle.

He loves to have his chest rubbed. He gets a little smile on his face, and his back legs get shorter, and he goes all sleepy.

We expected him to be pretty chilled about being sheared, and he was. He didn’t like it, but he was fairly co-operative, which is good because he had by far the most fleece to clip. 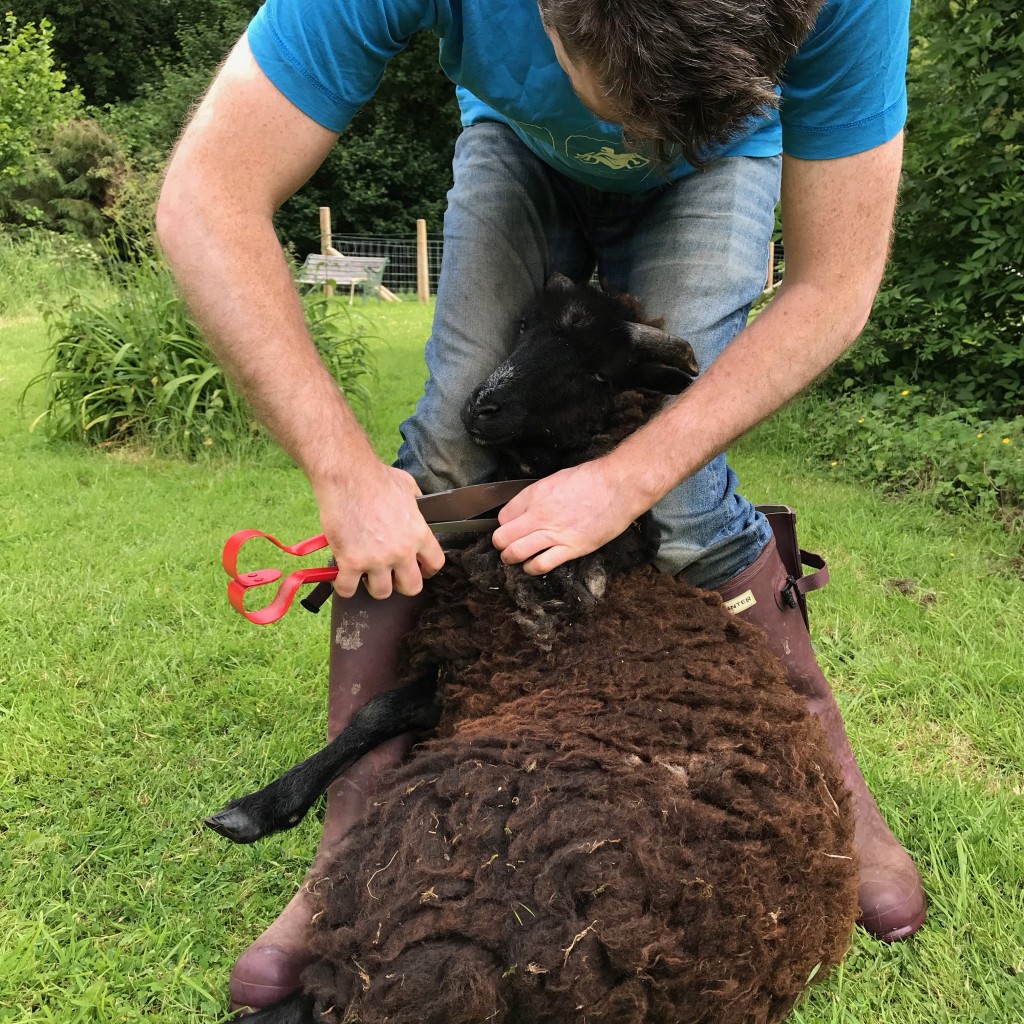 Here’s Kernic being the goodest good boy of all

A total of two hours and five minutes later, we have three TinySheeps in their summer uniforms and all is forgiven.

Things We Have Learned

You may be wondering what we’re planning to do with all that fleece.

We shall discover how to prepare it, how to spin it, and then we’re gonna learn how to knit. So if you’re a close friend or family member, expect to get home grown and inexpertly made woolly hats and scarves for Christmas, okay?