So, after all the mess and preparation and planning and mind-changing, we’re finally getting plastered.

The lads turned up on Friday – proper lovely chaps they are too – and proceeded to put the scratch layer of lime plaster on the walls and ceiling in the attic.

Joe and I are feeling quite smug because John, the master plasterer, kept saying what a beautiful job we’d done of the insulation and gap filling. Here’s what the attic looked like on Saturday morning – it’s already taking shape, and it’s certainly more echoey now.

We had some good hollow booming voices going on.

So, this is the gable end that adjoins the stone part of the house. They’ve put an extra layer on that centre panel because the brickwork was a bit of a mess where the chimney goes up the wall. So they’ve built it out to tidy it up. 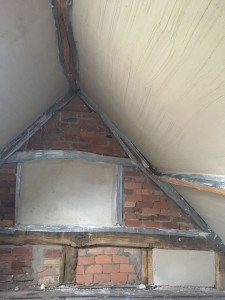 The other gable end. There’s still daylight under that tape, but not for much longer!

The plasterers are using special insulating lime plaster, which is not as good as using proper insulation, but is much better than just plastering onto a single skin brick wall. So it’s a decent compromise to keep the timbers on display, but not freeze to death in winter.

I guess we shall see! 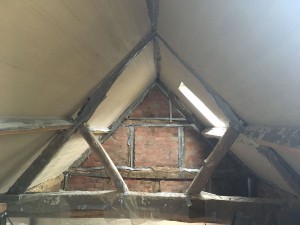 And the guys have tidied the windows up – which makes a big difference: 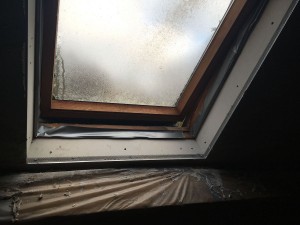 So, today they’ve been putting some of the top layer of lime plaster on and they reckon they’ll be done tomorrow. It already looks absolutely fab. I was beginning to doubt whether we’d really end up with a lovely room, but we totally will.

I’ll update in a few days with the finished article, before we paint it…

But in the meantime, our living room has become a serial killer’s kill room. I don’t know if you’ve ever seen Dexter, but… 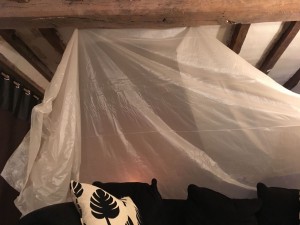 But surprisingly effective at keeping the worst of the chill out of my office. Hopefully tomorrow, we’ll be dust free for a little while…