Old houses are not the same as modern houses, and we can’t treat them the same way.

They’re designed to breathe and when they’re treated well, damp isn’t a problem.

Ancient buildings like this one don’t have a damp course in the walls to stop moisture being sucked out of the ground and into the walls. They also don’t have an air cavity in the walls to stop water transmission from rain on the outside surfaces to inside the house. Often there’s an oak frame that really does not mind getting wet as long as it has a chance to dry out afterwards. 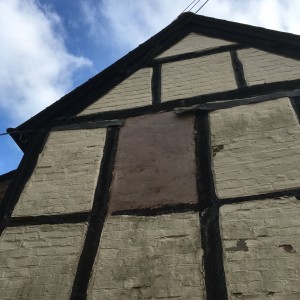 You can see the damp on the old brick panels

It’s really important to think about moisture management in an old house like ours.

It’s tempting to make efforts to stop the movement and transmission of this moisture altogether. Here’s some stuff people do to old houses to try to accomplish this:

We found a lot of this stuff in The Dingle when we got stuck in, and it’s really common in old houses that have been “improved”. The problems are, though, that:

All that well-intentioned effort makes such a house a horrible damp place to live, and eventually destroys the building.

So here is where we need to talk a little about lime and its purpose in an old house like The Dingle.

We can use lime as a mortar between stones and brickwork, and as a plaster to cover the stonework or anything else your walls might be made of. Lime is magical:

Lime was essential in building a house like this one. If we remove the lime and replace it with cheaper modern equivalents, we will wreck the house. Stones will split, timbers will rot, walls will grow mould.

Modern materials are fine for modern houses, which are designed to be airtight and watertight. They are not fine for old houses.

If you own an old house and a tradesperson is talking about using modern mortar, plastic, concrete, modern paint… please please please think very hard before going ahead.

Get advice from someone who specialises in working with old buildings.

If you try to shoehorn modern methods into old houses, you could well be doing huge damage to your home.