A small, uncontrolled fire in the Stone Room

A good house move should always begin with a small, uncontrolled fire in your front room, I believe. Followed by a trip to B&Q to buy a fire extinguisher and some smoke alarms.

We had the Rayburn serviced today, and it’s a bloody good job we did. We were going to light it and get it going, then get it serviced… and I think if we’d done that we’d have had the fire brigade out. Seriously.

Anyway, thankfully we couldn’t figure out how to light it — the instructions are somewhat esoteric and we had enough other stuff to be getting on with, like removing approximately 53.7 tonnes of sand and crap from the house.

So in walks Rayburn Bob, who came to service our stove. He went about his business, gave it a good old poking, looking at, and servicing, and drank his tea.

“Can you show us how to light it, please? We’re total townies and we have no idea how to use it,” I said.

Rayburn Bob demonstrates by lighting said cooker and boiler. Then exhibits a sharp intake of breath.

At which point, he gets up and runs. Joe and I look at each other in mild panic, as we’re poised to take a photograph of the Rayburn being lit for the first time. Gotta save these memories, right? But it’s okay — our man comes running back in with a towel, which he flings at me and barks: “Get that wet now!”

Then he fires a fire extinguisher into the now alarmingly flamey cavity. 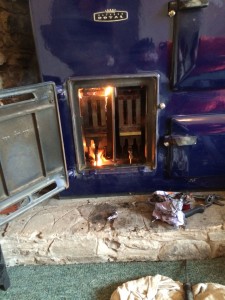 Potentially deadly inferno death with, Rayburn Bob starts packing up his stuff. “You can’t use that, I’m afraid. It’s been leaking oil into the insulation and it needs stripping and re-insulating.”

“Is that something you can do for us?” we ask?

Sadfaces all around. We’re going to speak to a local chap who apparently takes Rayburns and Agas apart and fixes them often, and see if we actually do need to spend a grand, or if we can just pull out all the oily insulation and replace it with vermiculite, as an Aga-based friend of mine has suggested.

Fingers crossed, eh? Because it’d be nice to get the stone part of the house warmed up before the end of the warm weather. Which, it being England, will last for approximately 3 weeks.

Still, the rest of the house is warm-ish. The shower room is just about the toastiest room I’ve ever been in, which makes showers a delight. And the storage heaters in the hallway keep the landing pretty warm.

The living room is huge, though, and with the inglenook at the one end, it struggles to heat the whole room. Poor Maisie snake is a little chilly, I think. We’re trying to keep her as warm as possible.

And the cats have taken to living on my knee when I’m working in the daytime, which is nice, but… somewhat inconvenient.

Anyway — we’ll post the outcome of the Rayburn investigation here. I’m fairly hopeful because it’s only a few years old, but I know nothing about them, so who really knows…

Top safety tip kids: always get your oil-fired stoves serviced before using them for the first time, if your house has been empty for the better part of two years…