When you think about a floor, what do you picture?

Boards, maybe a carpet or rug… and beneath it, strong sturdy wooden joists built to last forever (more or less) and carry multitudes of footsteps..

That’s what we picture.

What we don’t picture is THIS: 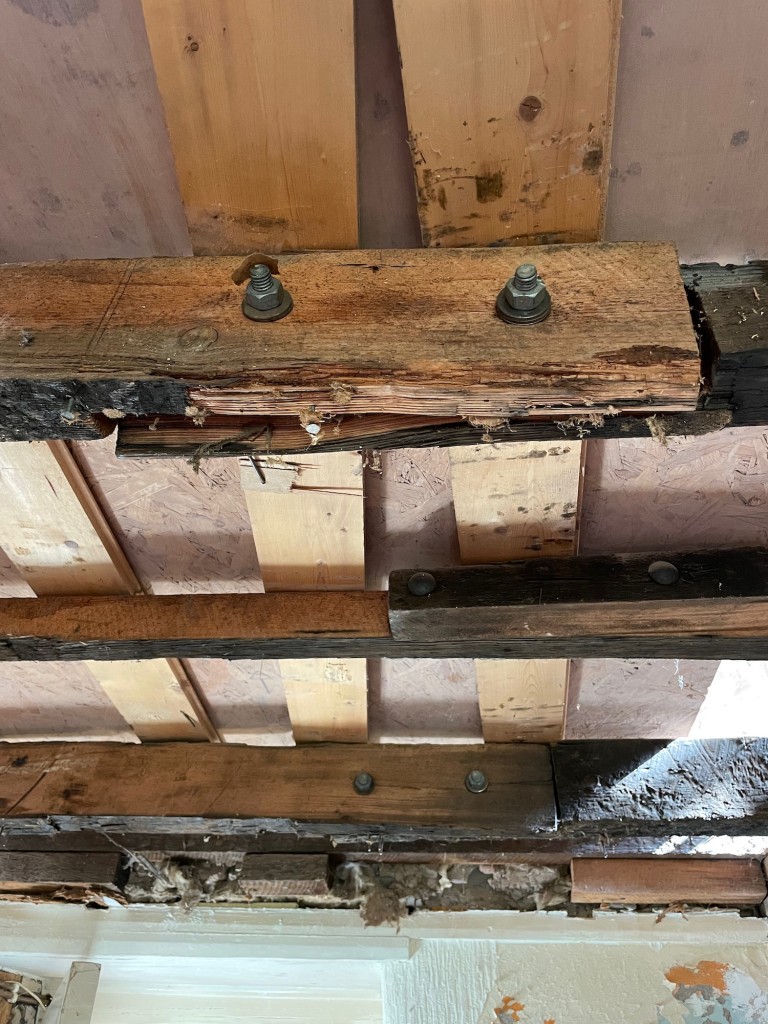 This part was fun too—see the actual gap where the joist fails to connect with the beam? 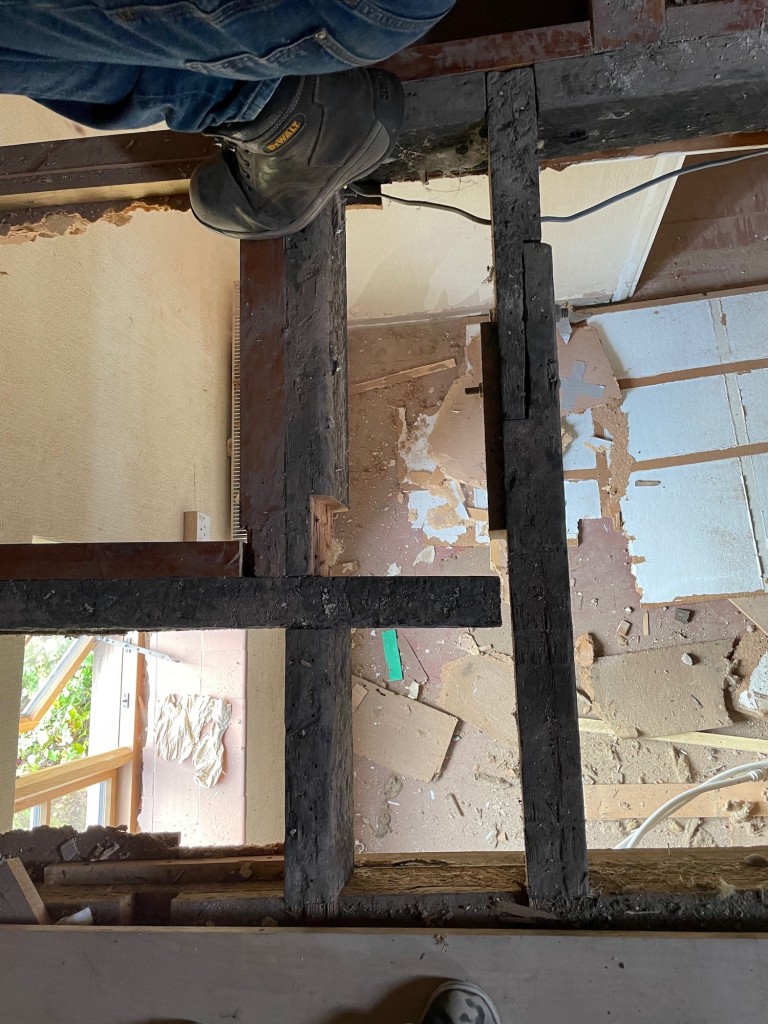 This is where an old staircase used to be

This is actually cool though because from the shape of it and the retro-bodging, we’re pretty sure there was a staircase in this corner of the room. We know this end of the house—the stone portion—used to be the village shop, and we think it may have been two separate dwellings at one point. So it makes sense that it’d have its own staircase.

Honestly I don’t know how we didn’t fall through that floor in the four years we used it as a bedroom.

But no more! Because we’re finally turning the Stone Room into a bathroom and the Rayburn Room into a library. Hurrah!

Before we go on, though, let us say this: although we’ve uncovered some fairly horrifying electrics and alarming structural stuff, we’re having a great time. Not just because this is genuinely fascinating and fun and we’re learning lots, and it’s extremely satisfying creating a home with our own hands…

But also because we’re getting a real insight in the history of the house and the resourceful and innovative (and delightfully eccentric) people who’ve lived here.

It’s a story of people who wanted to reuse as much as possible. Who perhaps didn’t have a huge amount of money, so did what they could with what they had. And who were absolutely unafraid of electricity.

We’re so grateful that we get to peek into some of this history, and catch a glimpse of the personalities who’ve lived here over the centuries. What a privilege to be the caretaker of a place like this 🙂

So. Here’s what we’ve done over the past few weeks, since the bats moved out (actually they never moved in again we don’t think, but we still held off work until the start of September)…

We started by pulling down the ceiling in the upstairs Stone Room. My dad came to help and got thoroughly covered in dust, bat poo, and general awfulness from a roof space filled with 150 years of living. Oh, and we all enjoyed the exciting wiring, which makes absolutely no sense at all. 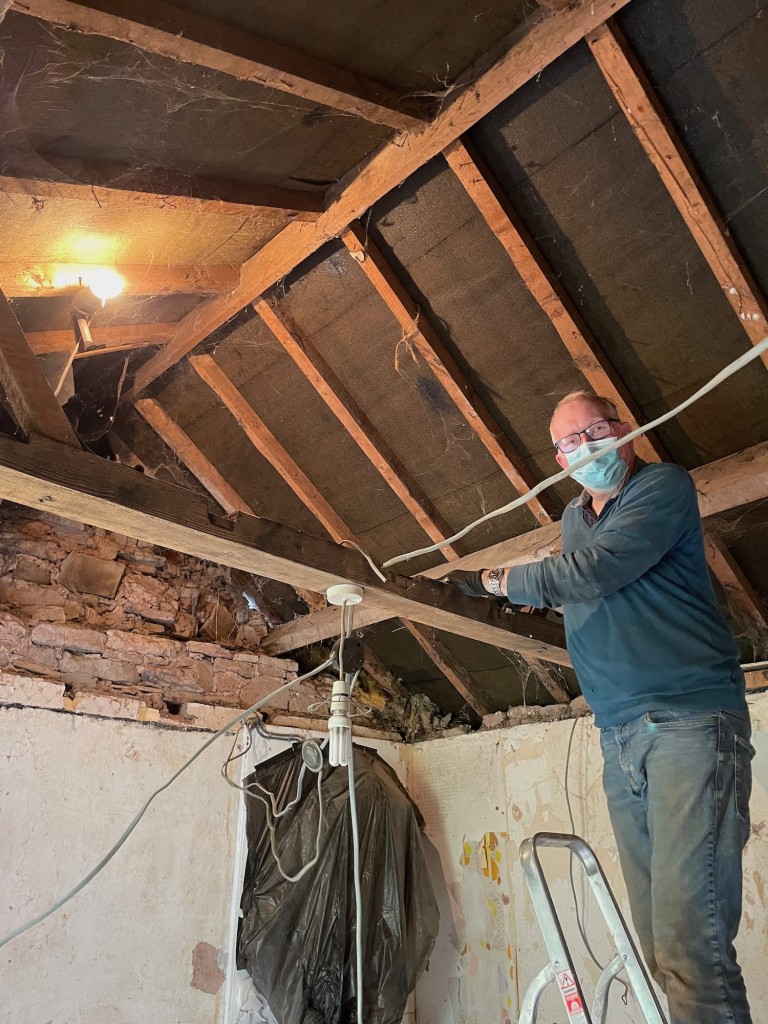 That ceiling structure, too, was made of spiderwebs and hope, but at least it didn’t have to actually hold anything up.

It came down pretty easily, which is when we spotted this: 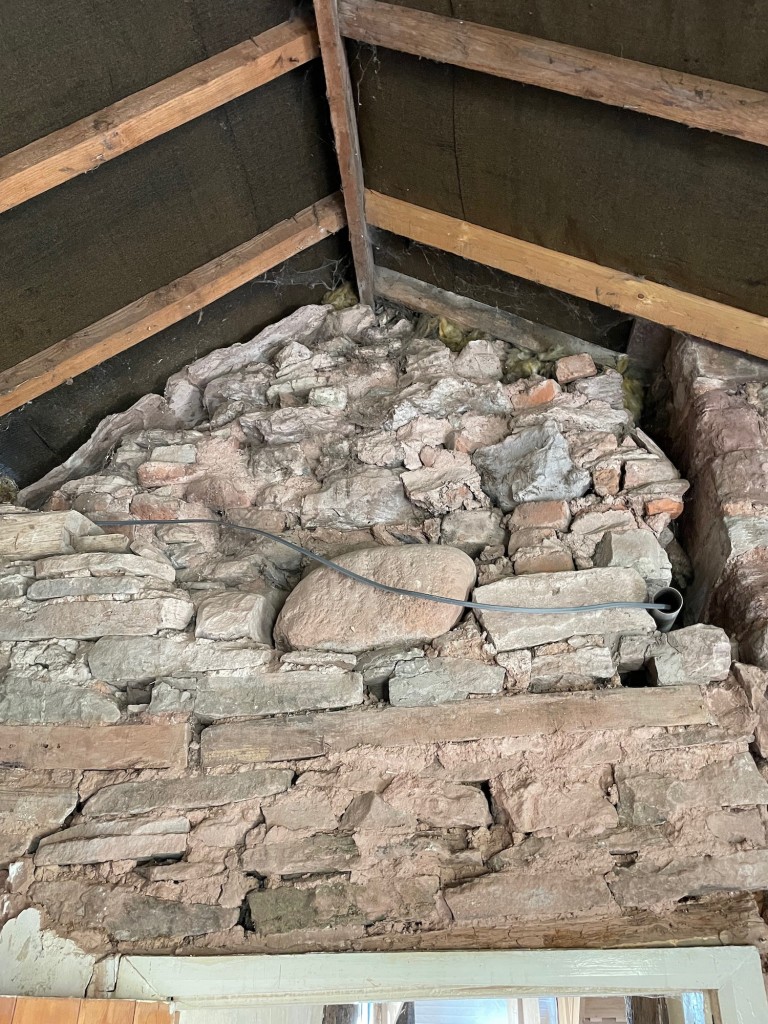 The Giant Death Rock of Damocles: yes, it’s that massive one right in the middle

This boulder is so big that we couldn’t lift it out. So we were somewhat alarmed when we touched it and it moved. And not just a fraction, but in a menacing way that suggested it had had enough of sitting in the roof space and was ready to come down and start a fight.

You’ll notice it’s positioned perfectly above the doorway and it absolutely would have crashed through the brittle plastic ceiling panel (not kidding it was plastic), onto the unfortunate person’s head, and thence through the floor to the Rayburn Room below. And probably from there into the molten centre of the Earth.

The first thing we did was mix up some lime mortar and cement it back into place, along with a few of its smaller but no less rowdy siblings.

So we’re no longer afraid of giant death from above, which is a relief.

Next up: clear debris from the tops of the walls and find stones suitable for drilling into and affixing a ring beam.

We levelled this around the room so it’s very horizontal. We’re pretty smug about this which is amusing because it’s now the only horizontal thing in the house.

Joe and my dad drilled 16 mm holes into the stone walls, and we inserted threaded steel rods. We hung off them to make sure they were strong enough. I think you could probably hang a car off them. 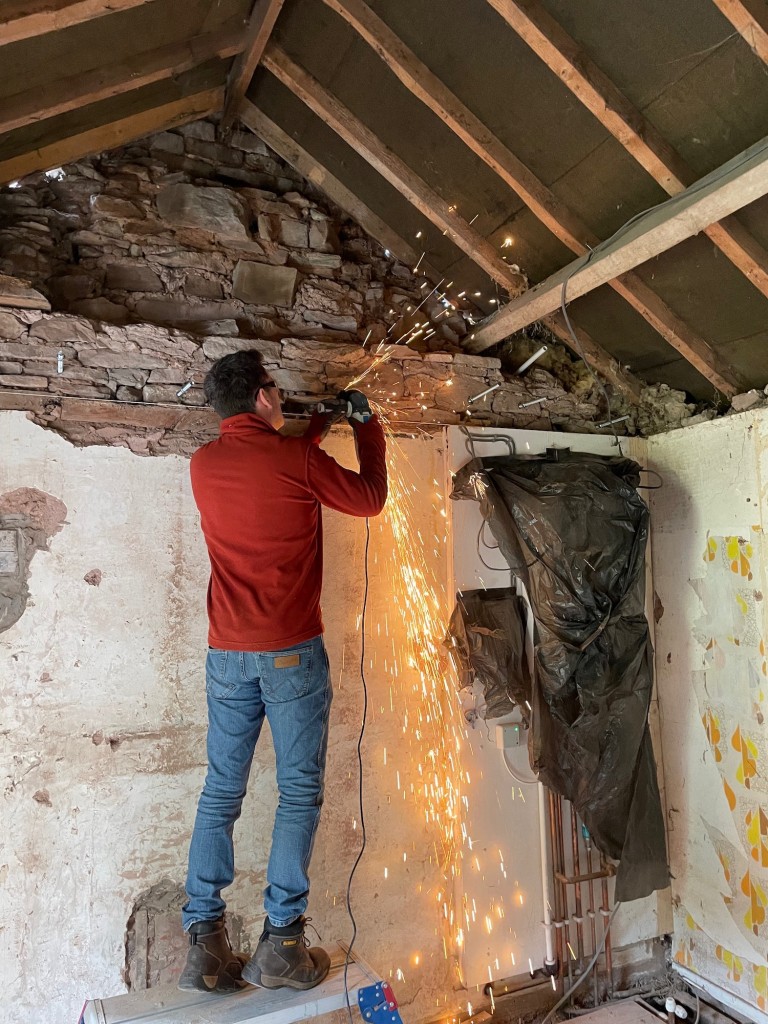 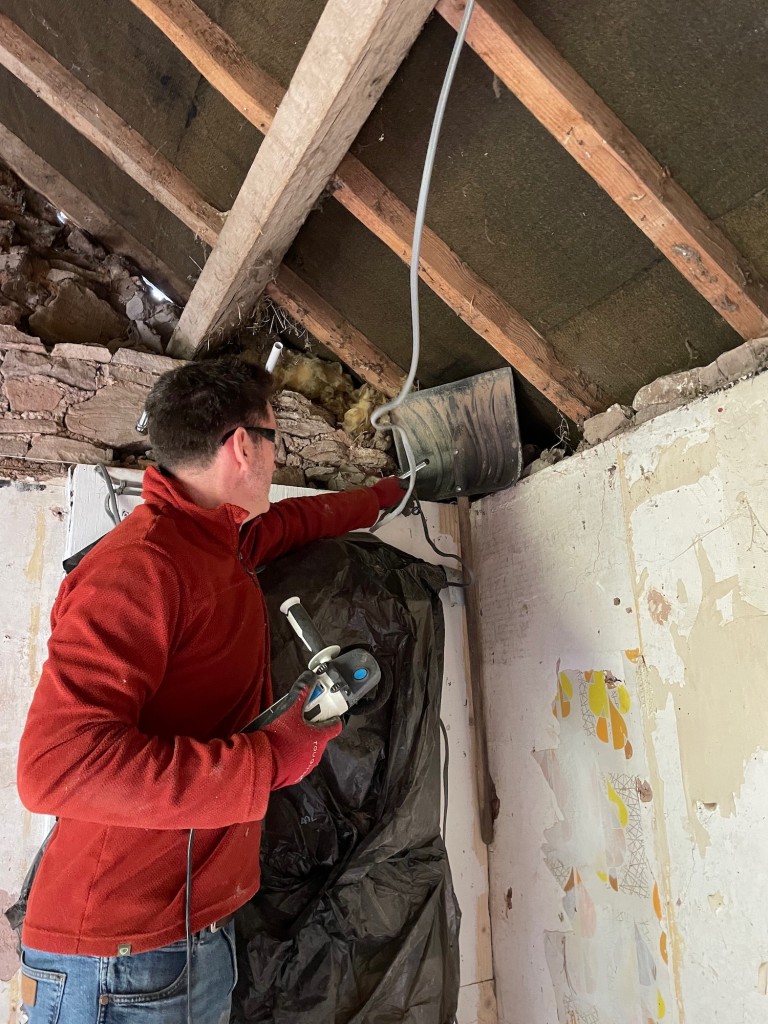 In fact, we’re fairly sure that if the rest of the house falls down, that ceiling structure we’ve built will remain standing.

Next up: some scribing, maths, a little bit of swearing and sweating, and we drilled some holes into the ring beam to correspond with the wall bolts—and held our breath as we finagled it into place. 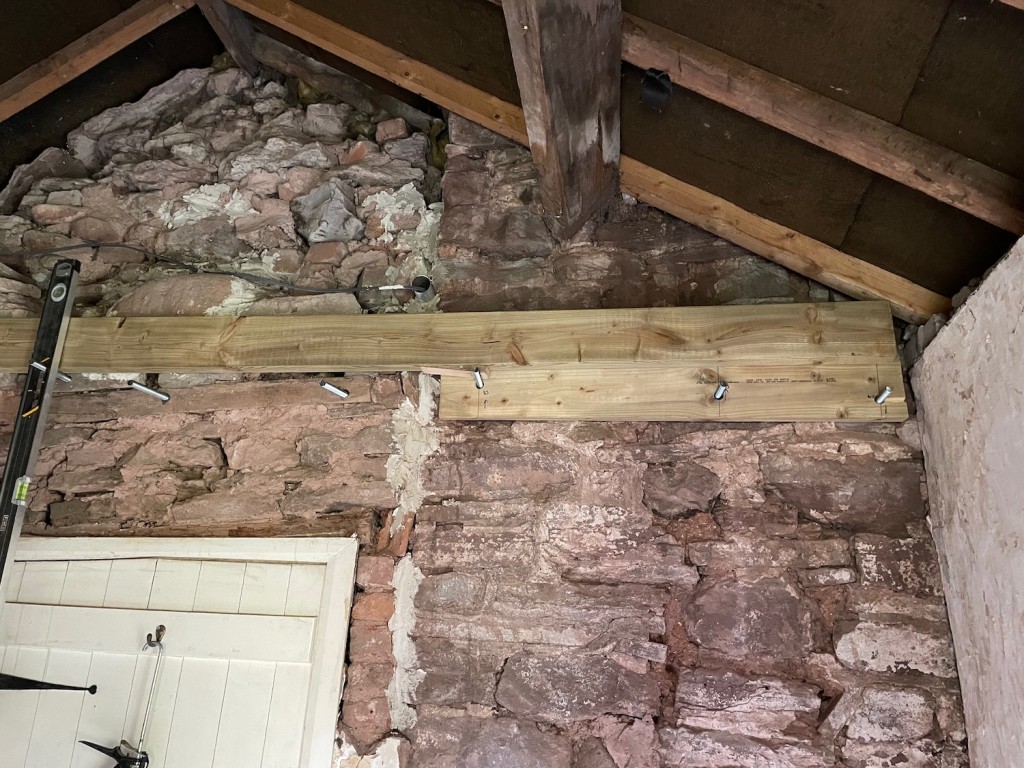 Much careful measuring and drilling of holes…

Bolts in, and it’s time to do the other side.

Joe and I repeated the process on the opposite side of the room, et voilà! We have a ring beam. 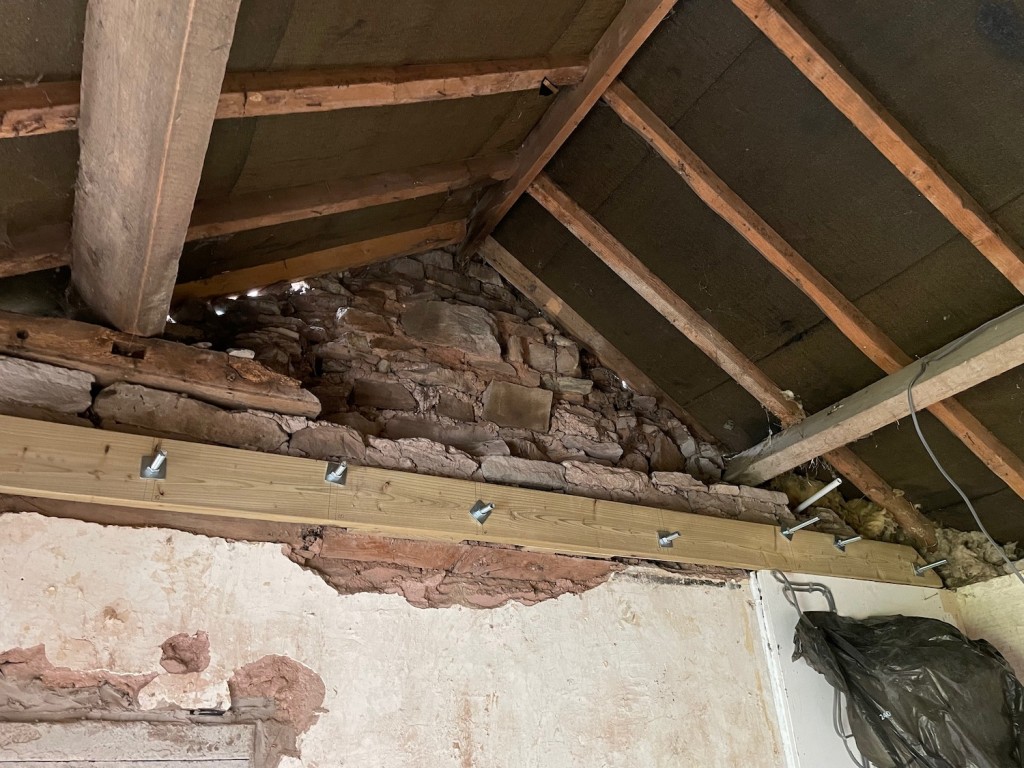 Woo hoo! The holes all matched!

Next job: cutting the cross joists to length and fitting them to the ring beam with brackets. This was a fiddly job made more fun by working at height on a wobbly floor covered with pieces of chipboard that may or may not collapse at any moment.

We used little pieces of wood to make hangers so we didn’t have to hold massive pieces of wood over our heads, then wedged the joists in tightly, then screwed the brackets into place—and tightened up all the ring beam bolts which had loosened as we expanded the house. 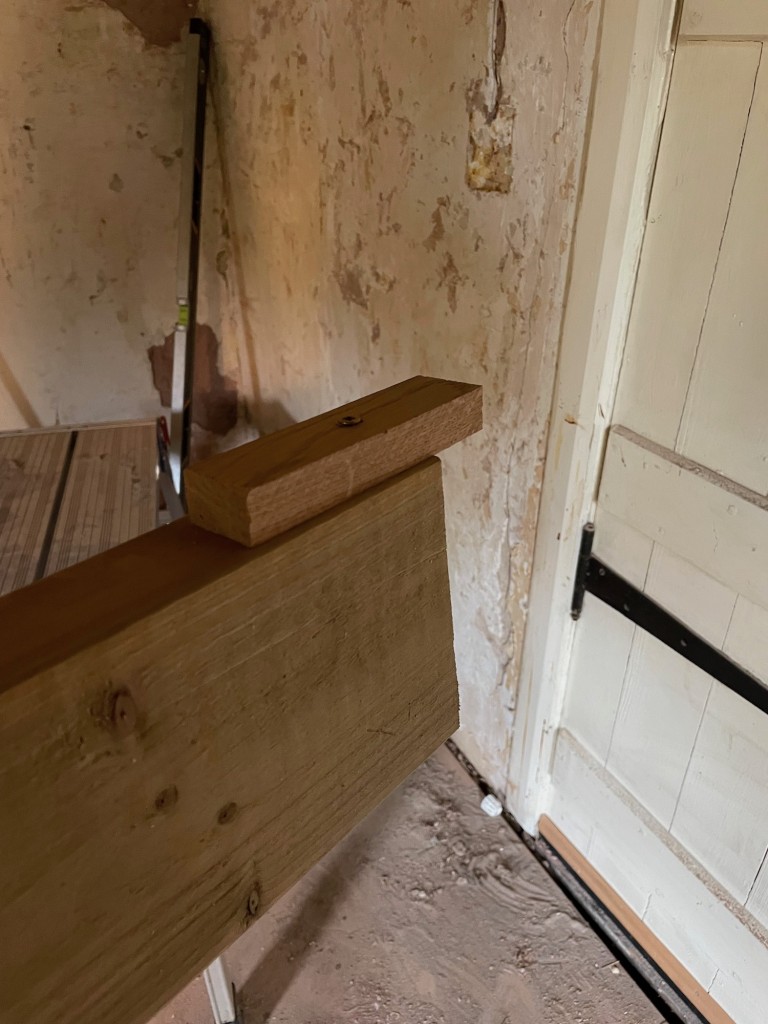 Making our job easier with spare bits of oak

We’re pretty pleased with the result. The ceiling is probably strong enough to hold a bathtub. It’s what you might call overengineered, but that’s cool. It’s not going anywhere. 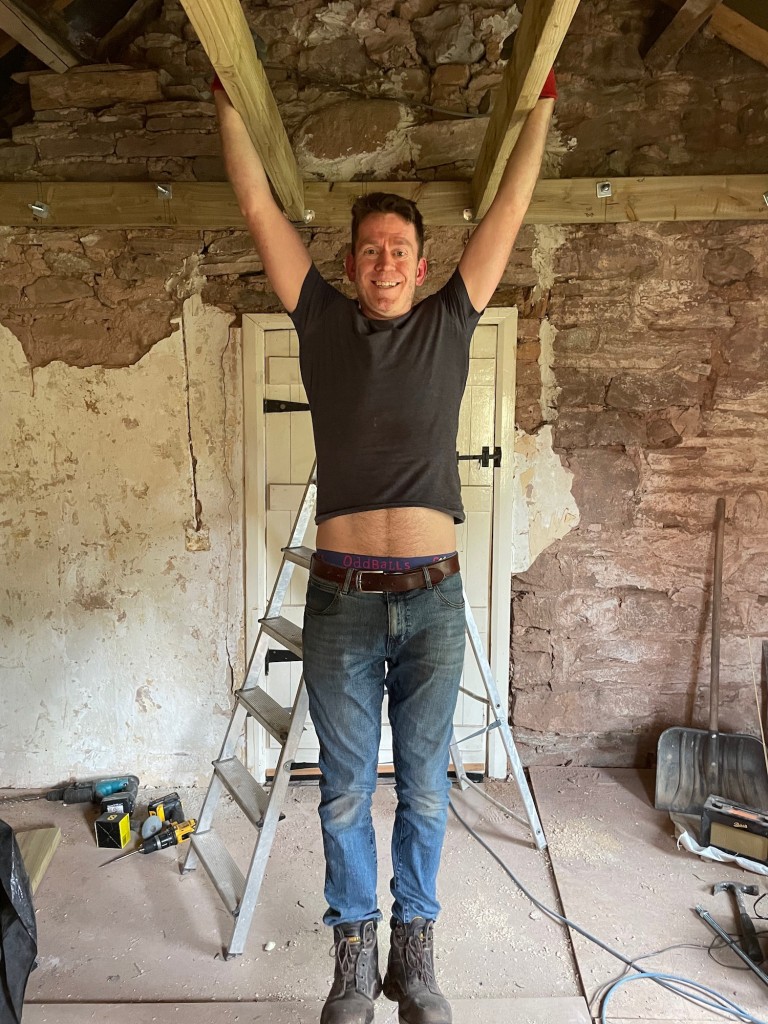 Joe proves that we are fine workpeople

(Aside: this moment started a competition which has not yet ended. Joe did one pull up, so I did three. Then Joe did three. So I did four. And so on. We’ll continue this until one of us is dead.) 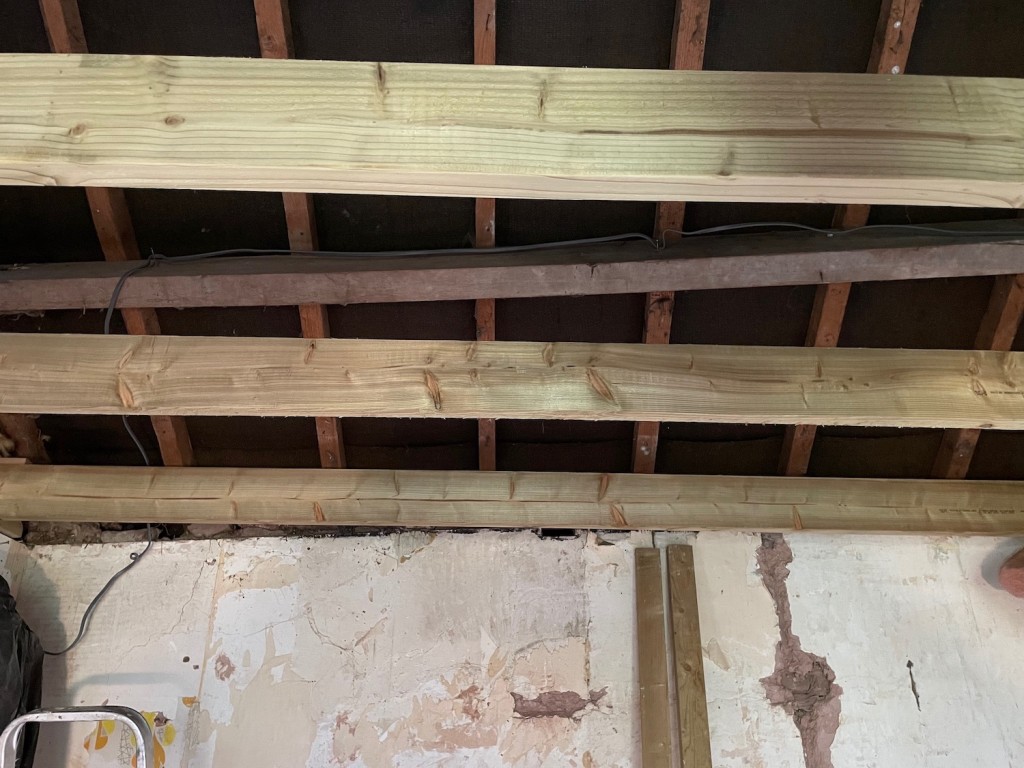 The joists are in!

Look at how wonky that roof is! Love it.

Then we fitted a loft hatch, because of course we did. Here it is, floating in a ceilingless ceiling: 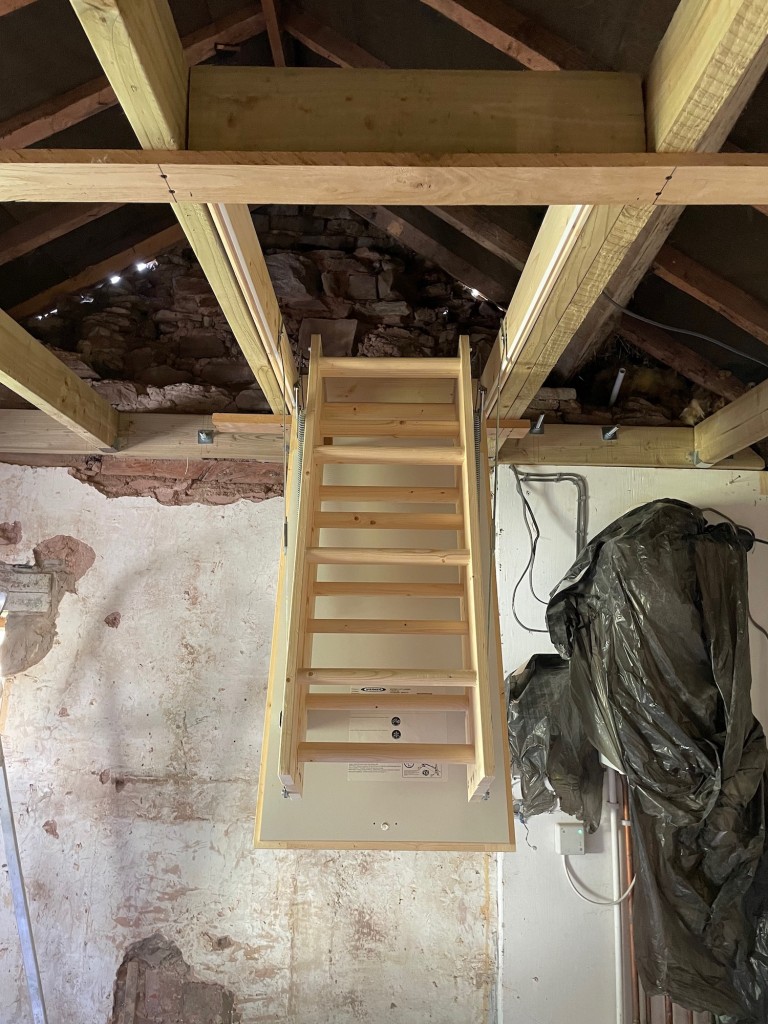 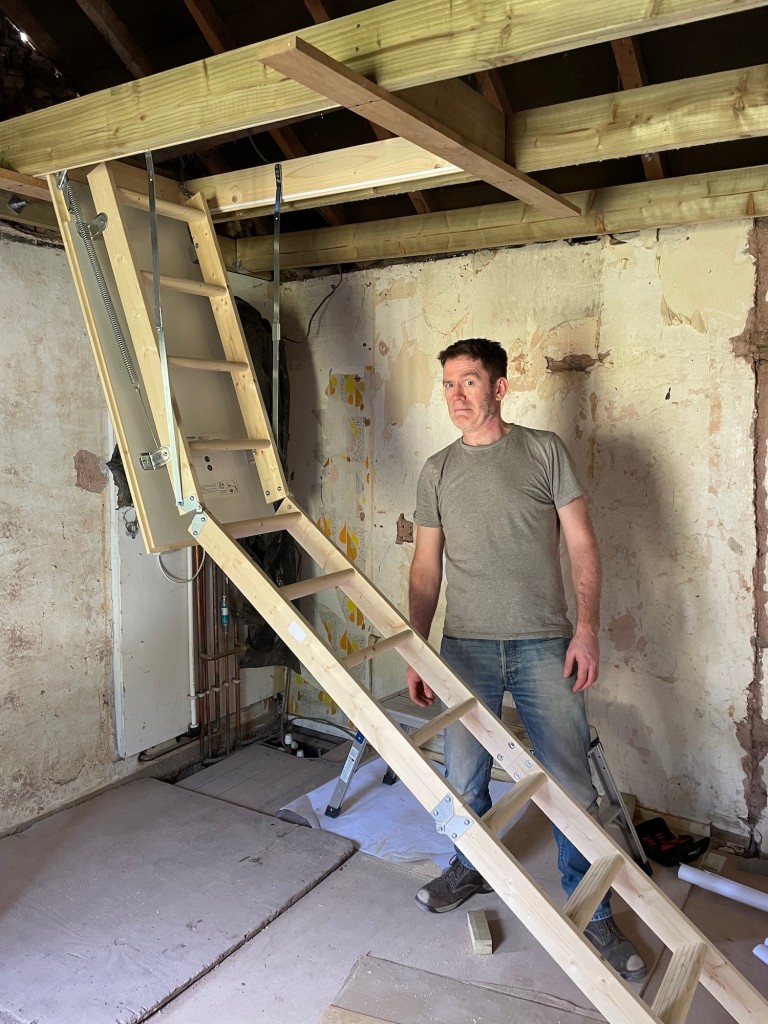 Think there might be more ladder than room here

At some point, of course, we’ll put up a proper ceiling and cut the ladder down to size. But for now, we’re happy with our overhead installation art.