The Most Overengineered Shower Cubicle Ever

It’s just hit me today that this bathroom is quite the undertaking. I mean, it’s not like we’re just ripping out an old bathroom and installing a new one. Maybe rerouting a few pipes. Bit of tiling.

Nope; we’re installing a full bathroom with shower wetroom area into a room that has never been a bathroom before and it is an epic project. So Imma stop moaning about how long it’s taking, and instead be impressed with us. Or roll my eyes at us. One of the two…

We are making a lot of mistakes. But that’s okay; we’re learning from them, and then making entirely new and exciting mistakes, and learning from those too. We’re realising that every single job we want to do requires us to have done three tasks previously, and each of those required pre-work too. It’s brain-melting.

And because we are not builders or plumbers or responsible adults, we’re freaking out about what we need to do, and massively overengineering everything. Remember our massive floor and ceiling joists that will probably outlast the heat death of the universe? Well, we may have gone slightly overboard with the stud walls too. I think Joe’s builder friend raised an eyebrow or two. But more on that in a moment.

We’ve built a stud wall divinding the shower and toilet areas, and then stud walled the back wall of the shower too, so we can put piping back there and build a niche into the wall. Then we straightened up the end wall that’s actually attached to the house with battens and marine ply. 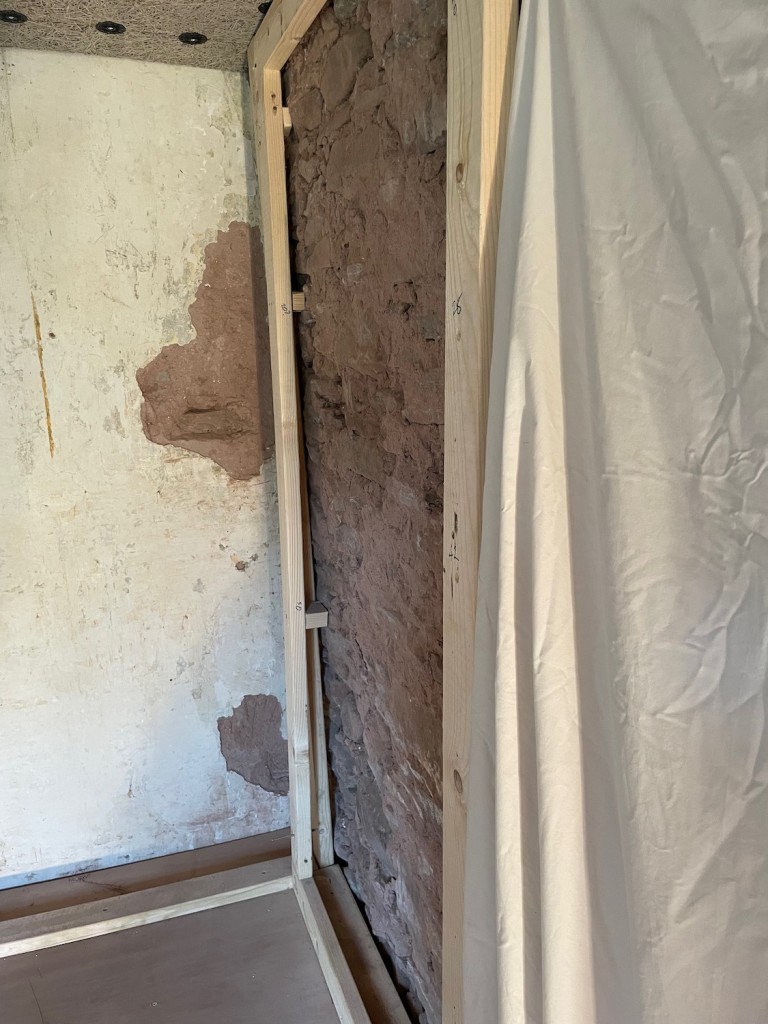 Walls are juuuuuust a little wonky

You can see the amount of lean if you look at the bottom of the batten frame. This was our second attempt, by the way. The first time, we fixed the marine ply to it, then went away from the room for a few days. When we came back, we thought it looked a bit… off. It was. A spirit level showed us we weren’t even close to vertical, so it all had to come off. You might think we’re being super-fussy and we are, but we also know that if the walls aren’t vertical and square in the shower area, the tiling will look awful.

So we did it again, and got it cock on: 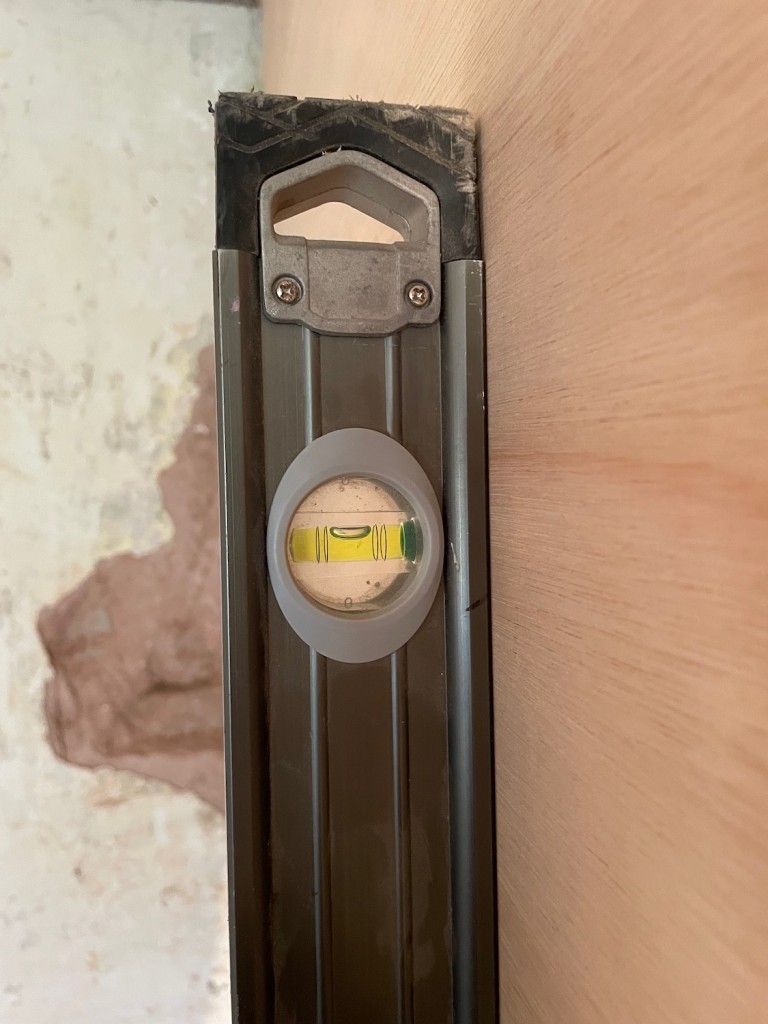 Then we built the stud wall that will form the end of the shower area and divide it from the toilet area. As you can see, it’s quite sturdy: 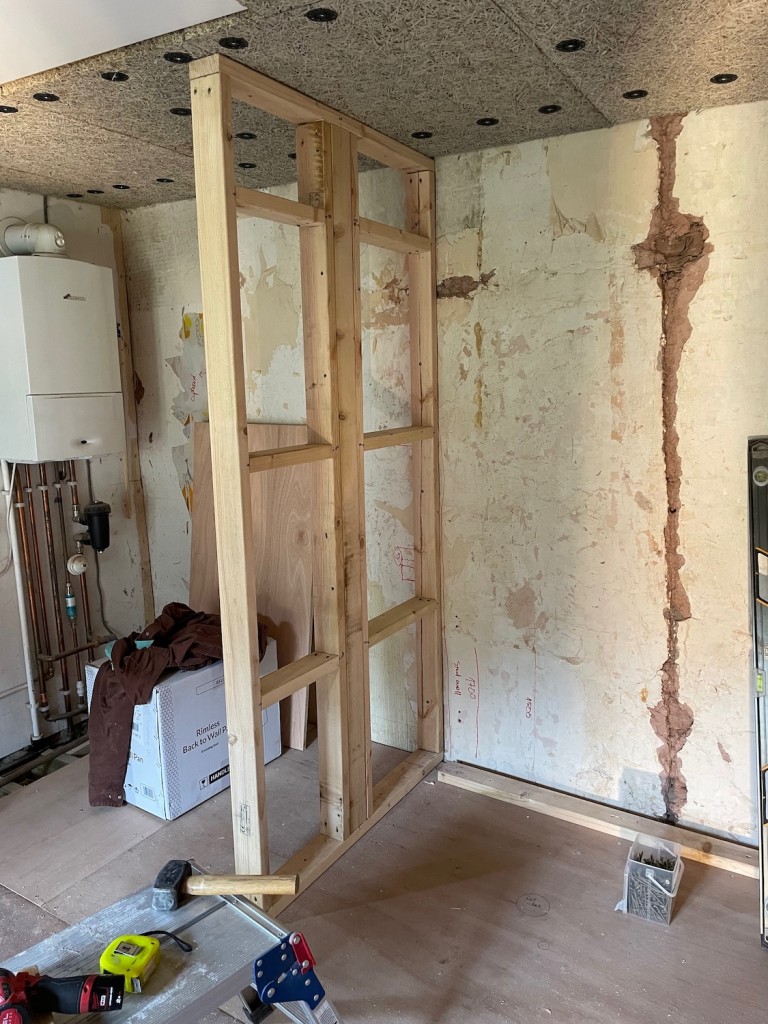 Then we did the same thing along the back wall, to create space for the pipework and to create a niche for bottles and soap and all the gubbins we use in a shower. 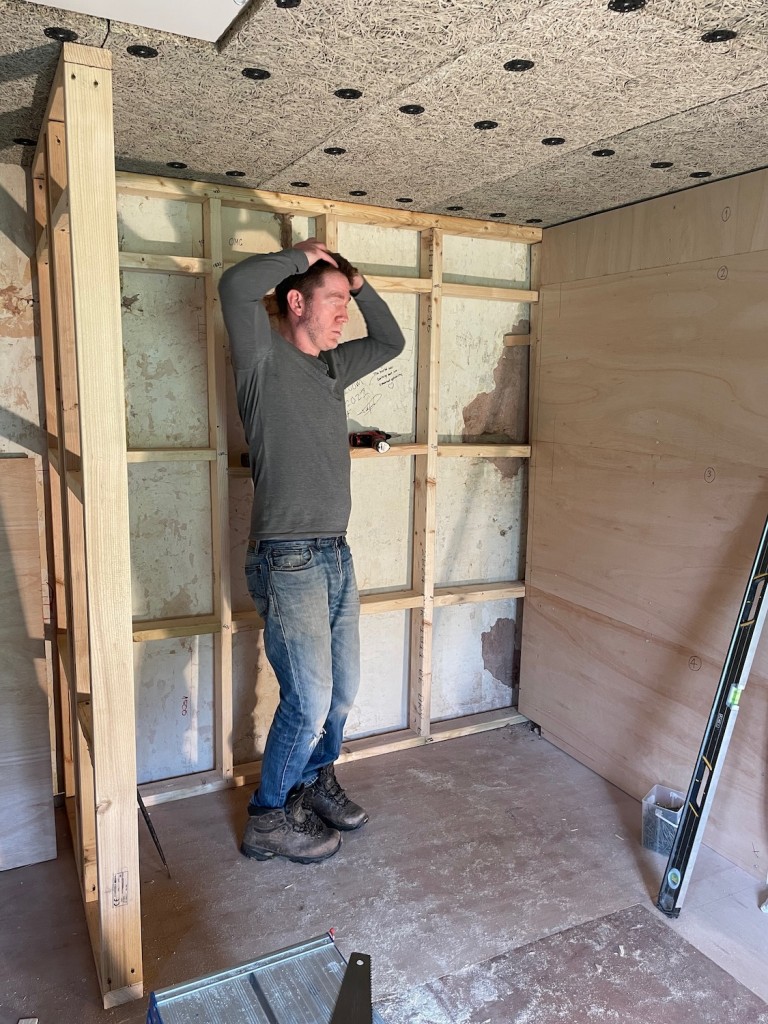 We’ve built a niche and also a backboard to fix the shower valves to. This may be one of our mistakes, but if it turns out to be, we rectify it in future… we’ve decided to have the shower on the stud wall to the left, the part projecting into the room.  But the shower valves will be on the back wall, so we can turn on the shower before getting into it—so we don’t get blasted with cold water.

However, there is going to be no way to remove the wall to get at the pipes should there be a leak—so we’re taking a bit of a risk here. We’ll obviously throughly pressure test everything but if we do have a leak, we’ll have to rip the wall apart to fix it. If that happens, we’ll relocate the valves and plumbing to the stud wall that protrudes, and install a removable panel so we can get at it. I dunno if we’re being foolish or not. Maybe future us will curse present us. Who knows!

Here’s the niches in progress: 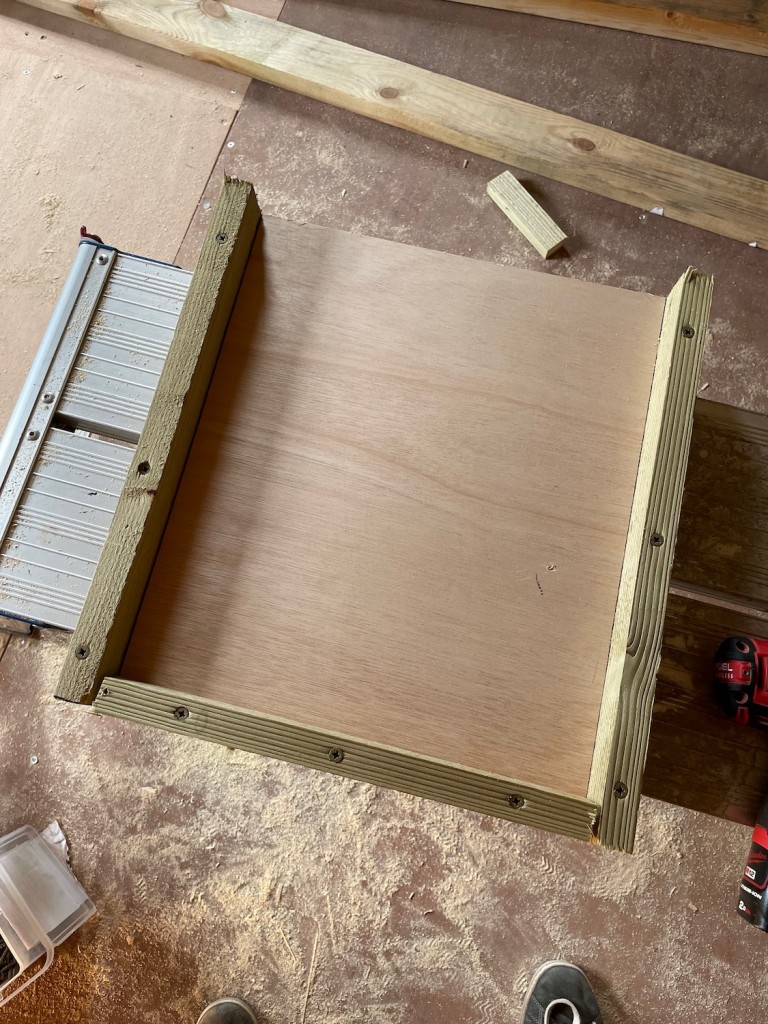 Niches. Where there are riches, apparently.

And that is all for now. Join us again to find out how we manoever a massively heavy shower tray into place without destroying it and us…

The Mysterious Plumbing of Dingle

Now Christmas is over and everything’s back to normal, we decided we’d better get back to work in The Dingle. Next stop is the stairs and floor, and we still have some way to go before we’re ready for that – not least of which was getting rid of the header tank inconveniently located in the attic. 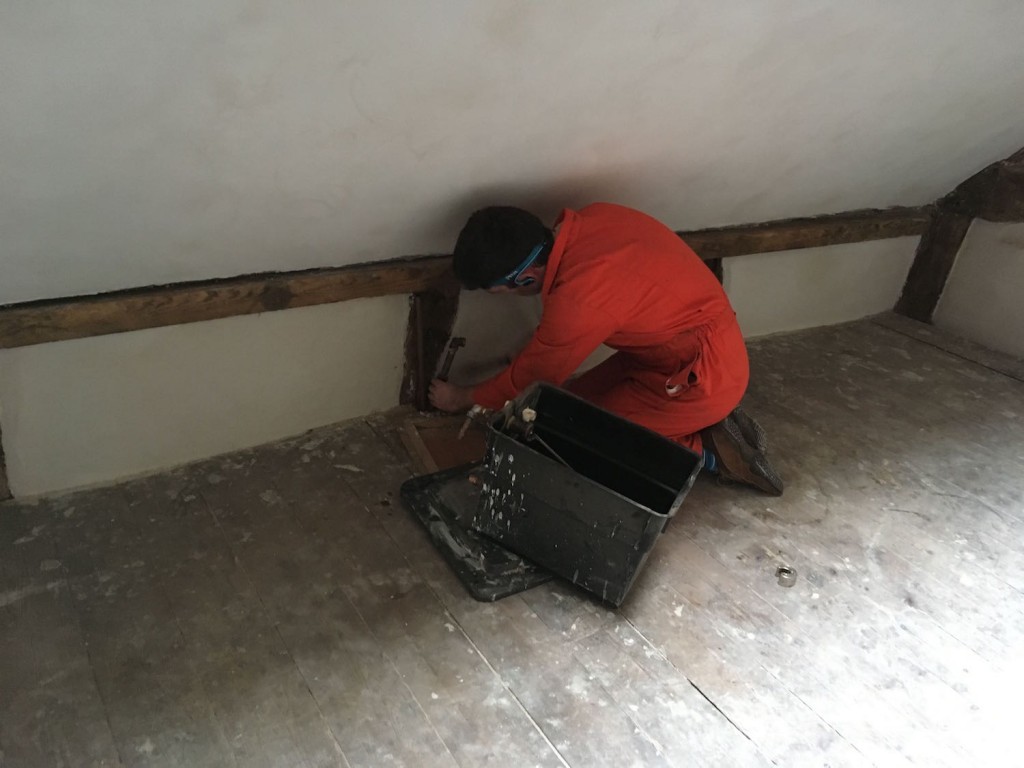 You can see how we wouldn’t want a water tank dripping away next to our bed, right?

Now, we weren’t entirely sure what this header tank was doing. We’d done some cursory investigations and come up stumped. So my first suggestion was to just take it out and move it into the Stone Attic.

Then Bill the plumber came round to service the Rayburn and I diverted him up to the attic instead to have a look. After some sleuthing, we figured out it was feeding the shower in the ground-floor shower room. That room will eventually be knocked down with the rest of the lean-to additions, but for now we kinda need a shower.

The hot was fed from the hot water tank in what’s currently our bedroom (the Stone Room) and cold couldn’t come off the mains because the pressure was too high. We’d just get cold water if we did that.

So we went and bought a pressure valve, some plastic pipe (temporary measures, remember!), and some courage.

Joe set to work manfully and discovered two things. Firstly, an old pub sign was repurposed as a shower room wall panel, which is ingenious – we’ve found loads of brilliant repurposing in the house so far: 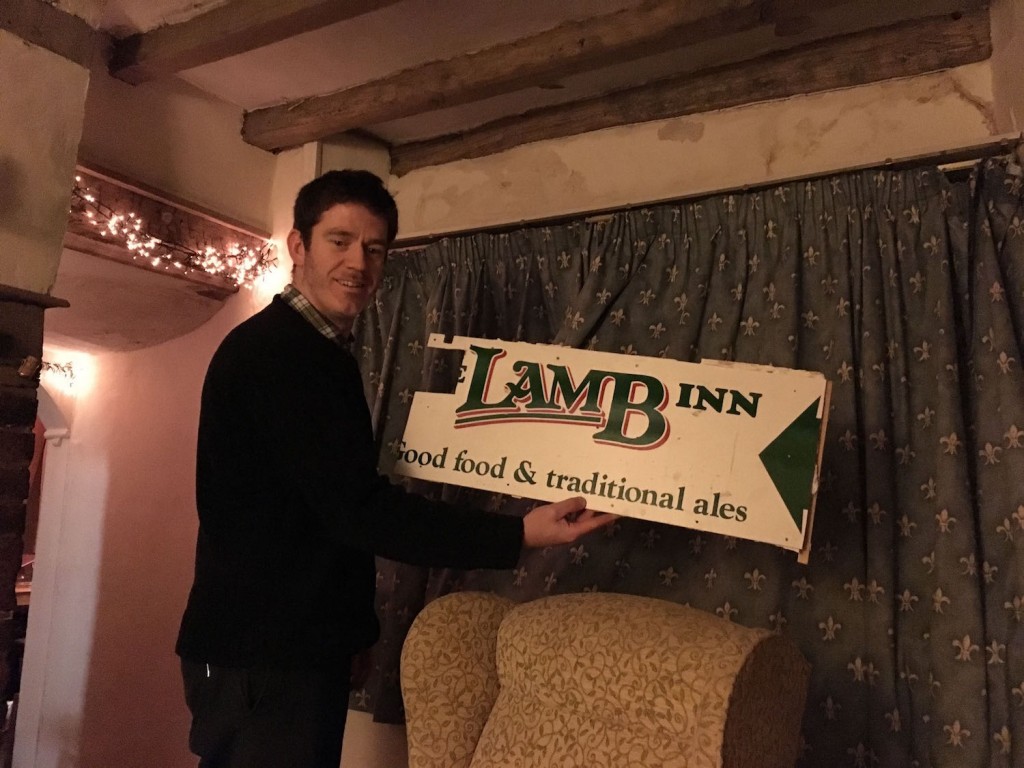 Secondly, the plumbing is interesting. There are many water feeds to different places.

I took a picture:

The answer was to cut out some bits of batten here and there so we could take mains cold water from the existing pipe and route it up that blank wall with lots of mystery holes in it, and around to the shower, then add a pressure valve, like so: 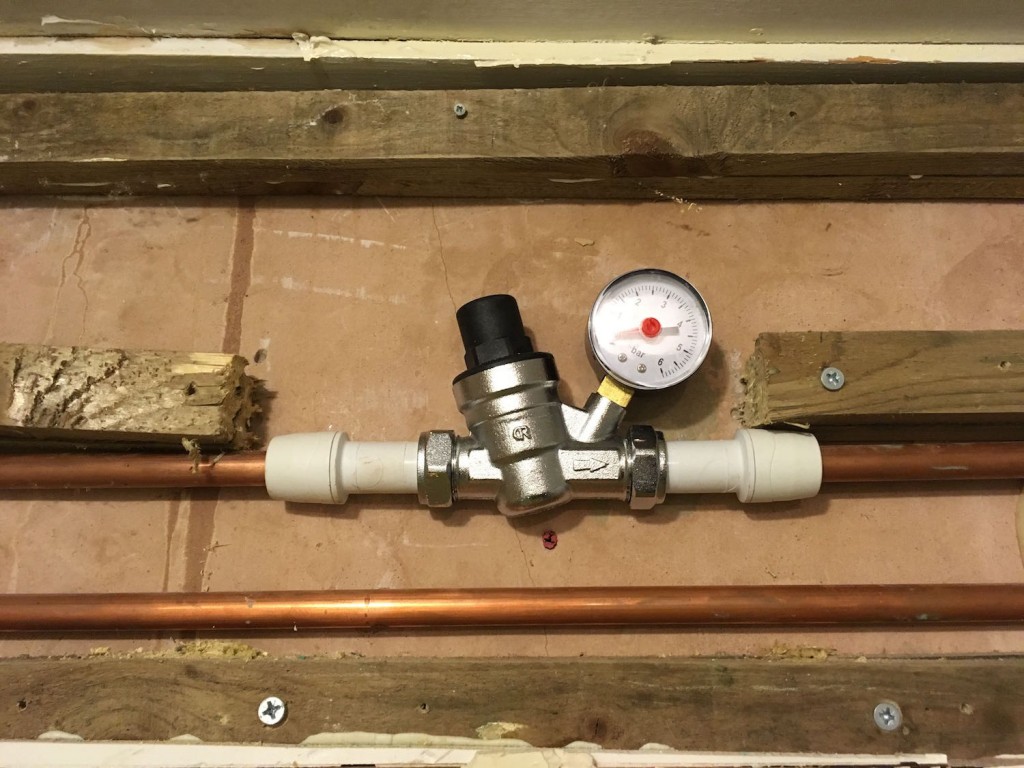 Then we (well, I say “we”. I was working. I actually mean Joe) put it all back together and ta-da! We have a working shower and no bloody header tank in the attic! This feels like real progress for the first time since the plastering went on.

I’m seriously impressed with Joe because he’s never done any plumbing before and he confessed he was a little nervous about “flooding the entire house and village and planet”. I knew he’d be fine because I’ve done a little simple plumbing before, but I wanted to watch him flapping.

Here’s a little bonus for you. I heard strange noises coming from attic, so I went to investigate. Here is what I discovered…